The Department of Crop and Soil Sciences is dedicated to providing the best education programs at the undergraduate and graduate levels.

Our students are among the finest in the world and, in this section, we want to brag a bit! Keep checking back to see who we spotlight next!

UGA was well-represented in the winner's circle at the Southern Weed Science Society annual meeting.  Six out of twenty-four awards were given to UGA students.
In addition, Nick Hurdle received with the outstanding M.S. Grad Student award.
Well done to all!

Dahal is a former CRSS graduate student and was advised by Dory Franklin.

The paper is titled "Strategic Grazing in Beef-Pastures for Improved Soil Health and Reduced Runoff-Nitrate-A Step towards Sustainability."

Our Students at the 2020 ASA-CSSA-SSSA International Annual Meeting 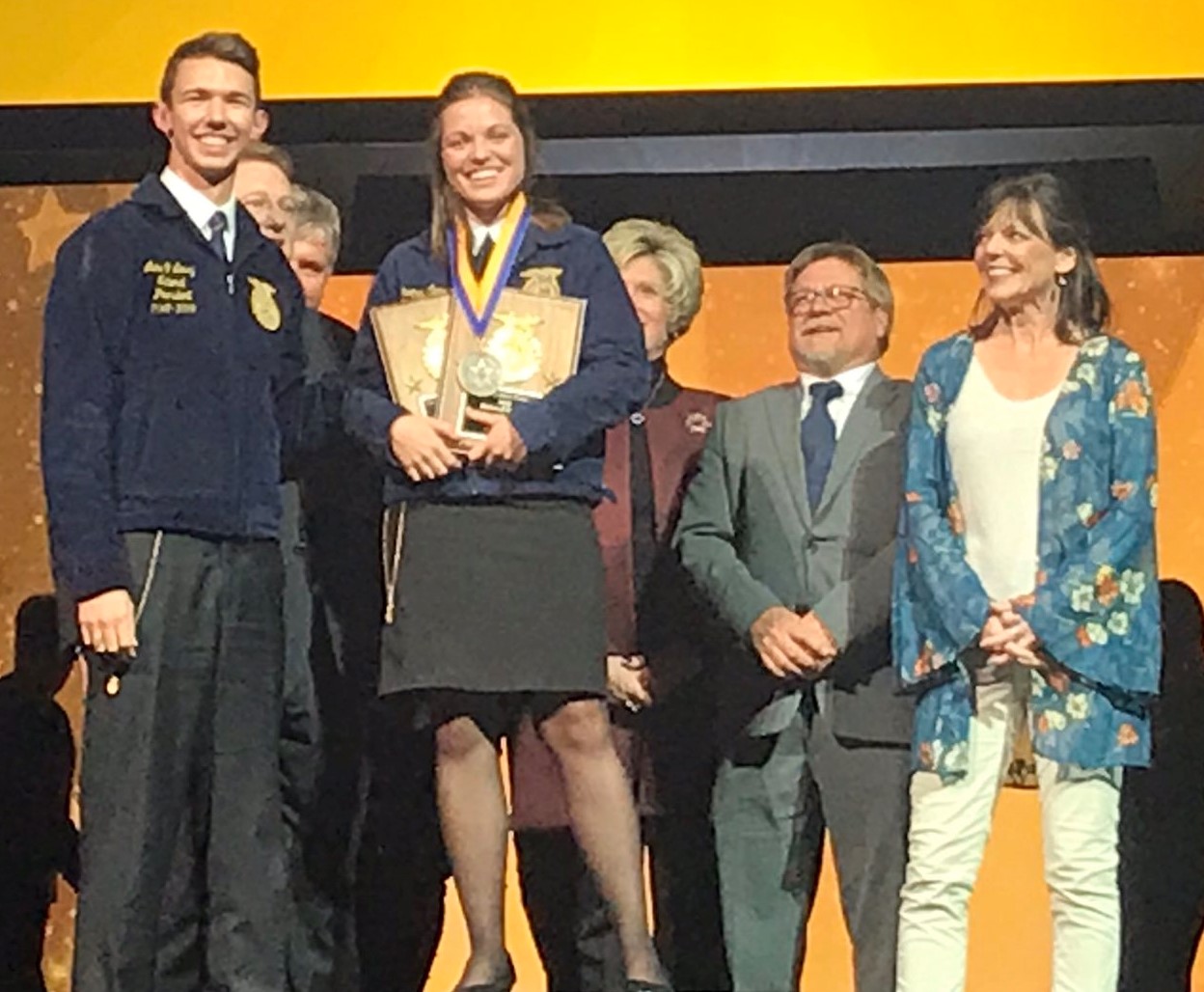 Cameron is the 2019 American Star in Agriscience Winner

Courtney Cameron, an AES major in Crop and Soil Sciences, was named the 2019 American Star in Agriscience winner at the National FFA Convention in Indianapolis held October 30 - November 2.

Courtney is from Valdosta, Georgia and is involved in plant disease research.

Three UGA Crop and Soil Sciences graduate students received five awards for their presentations at the Southern Branch of the American Society of Agronomy held virtually from January 30 to February 1, 2021. 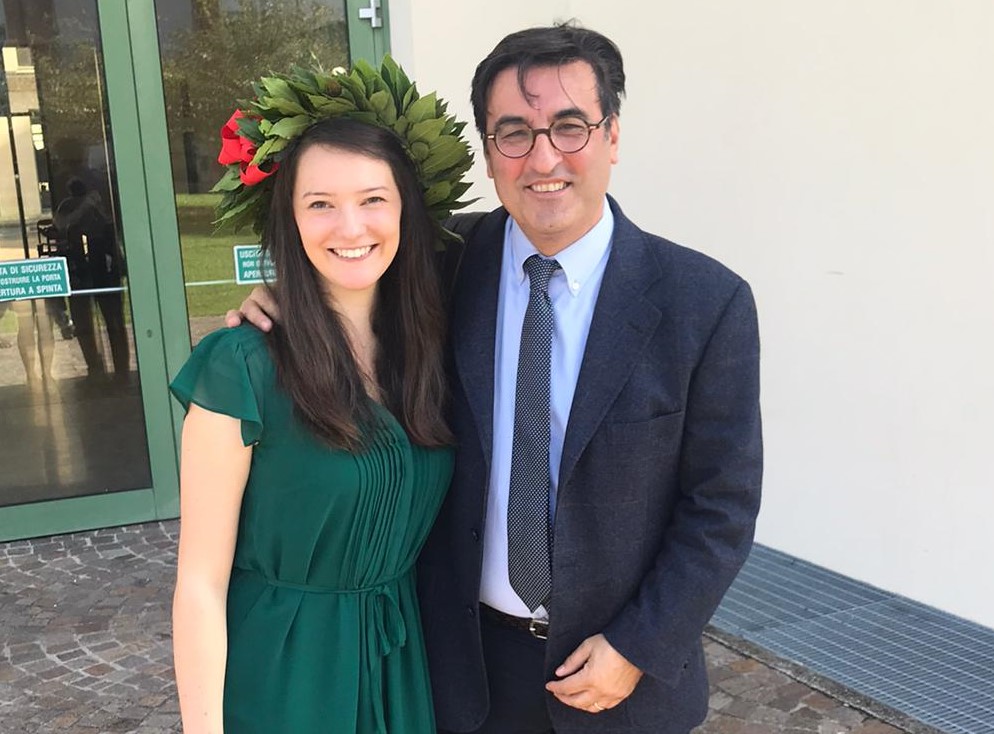 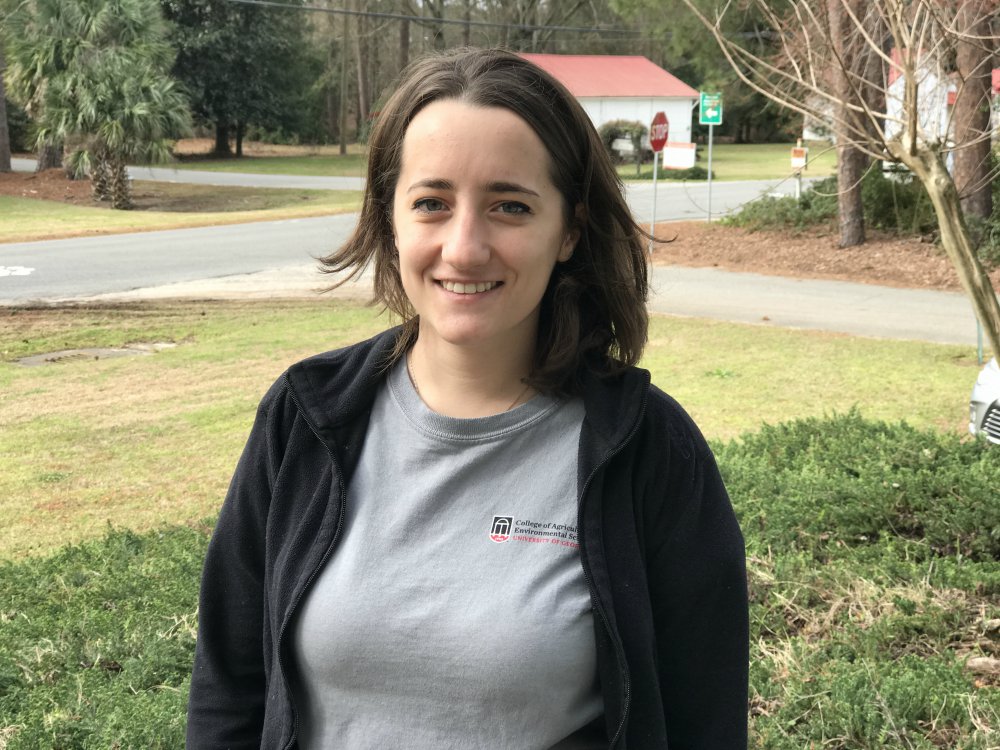 Arianna Toffanin, a M.S. student participating in the Dual Master’s of Science in Sustainable Agriculture Degree program received the Best Poster Award at the European Conference on Precision Agriculture in Montpellier, France. She competed against 86 other posters submitted by precision agriculture researchers from all over the world.

The title of Arianna’s poster was “Scheduling Nitrogen Applications in Maize with a Simulation Model.” Arianna is co-advised by Drs. George Vellidis and Maurizio Borin. 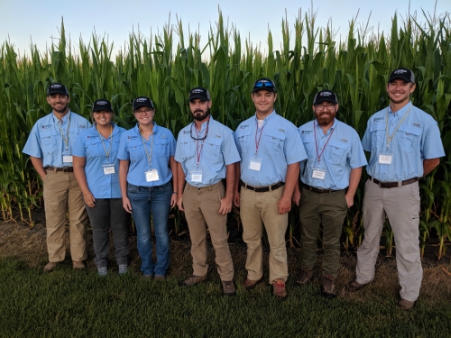 Congratulations to the UGA Weed Team for their 3rd place finish in the Southern Region Section of the National Weed Science Contest in Seymour, Illinois. The team place 8th overall (out of 67 teams) in the national rankings.

The National Weed Science Contest (affectionately known as the "Weed Olympics) is a joint activity between the Northeastern, North Central, Southern, and Western Weed Science Societies. The purpose of this national contest is to provide a competitive educational experience from which students from universities across the country can broaden their applied skills in Weed Science. 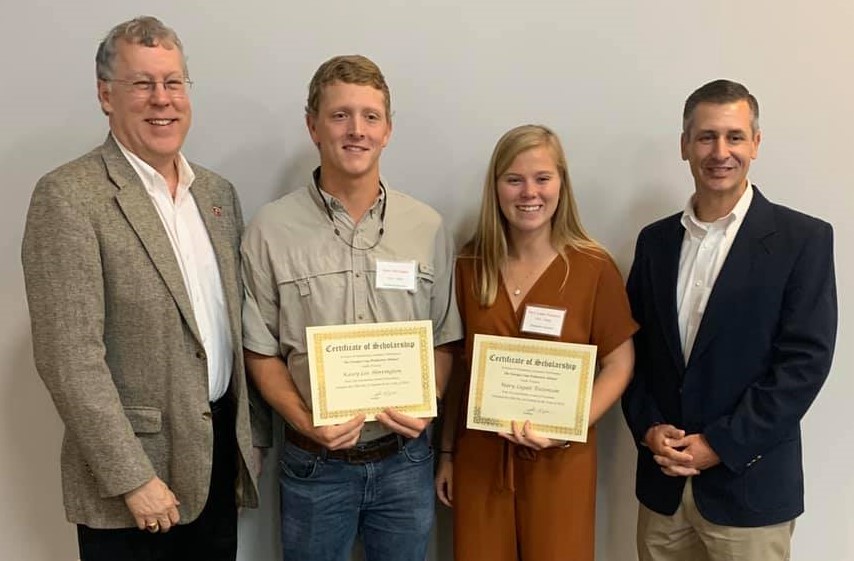 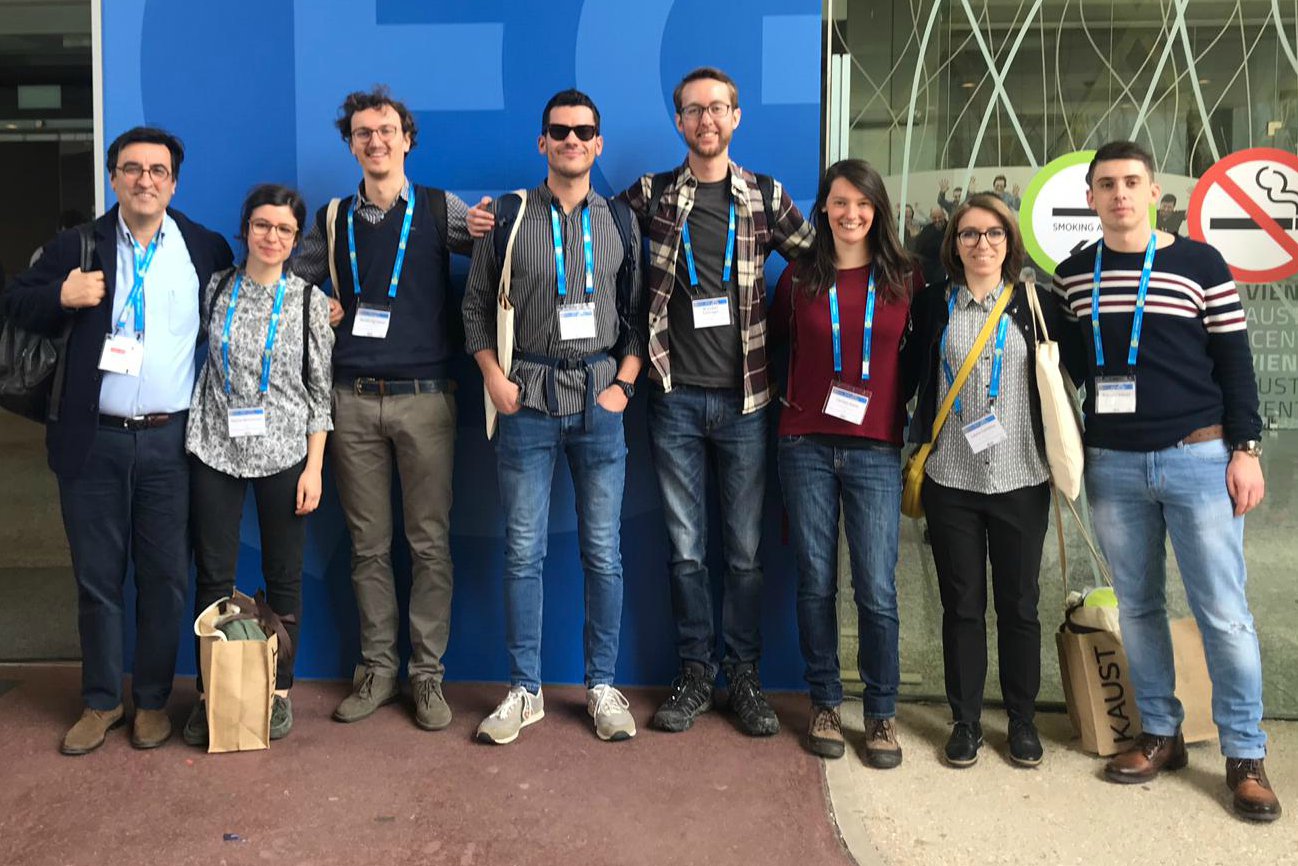 Both students are participating in the Dual Master’s Degree with the University of Padova and are currently in Italy conducting their thesis research. 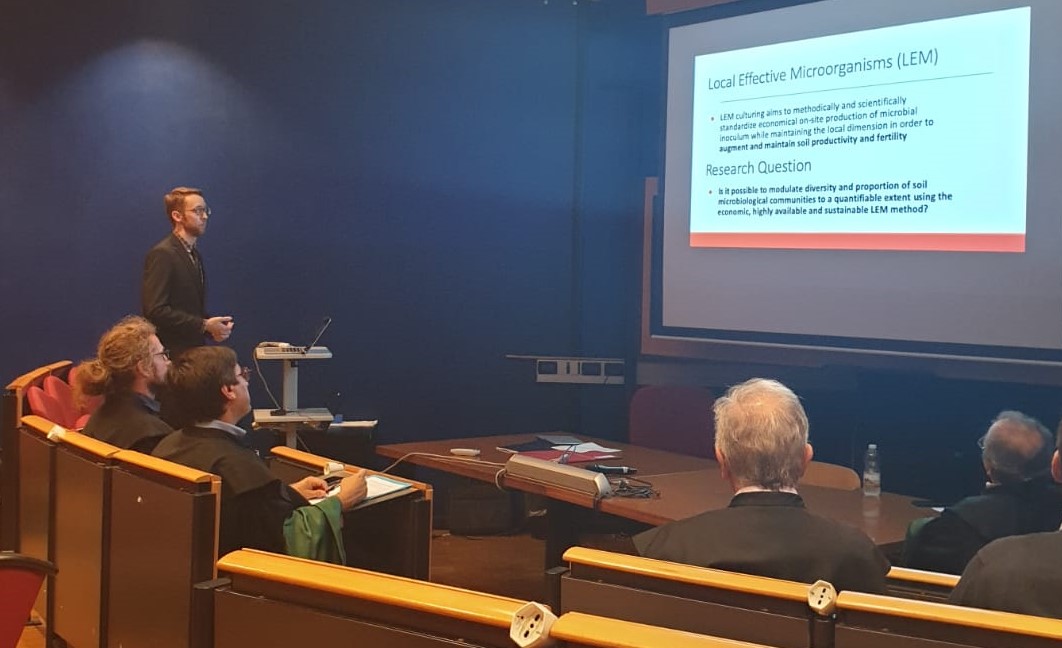 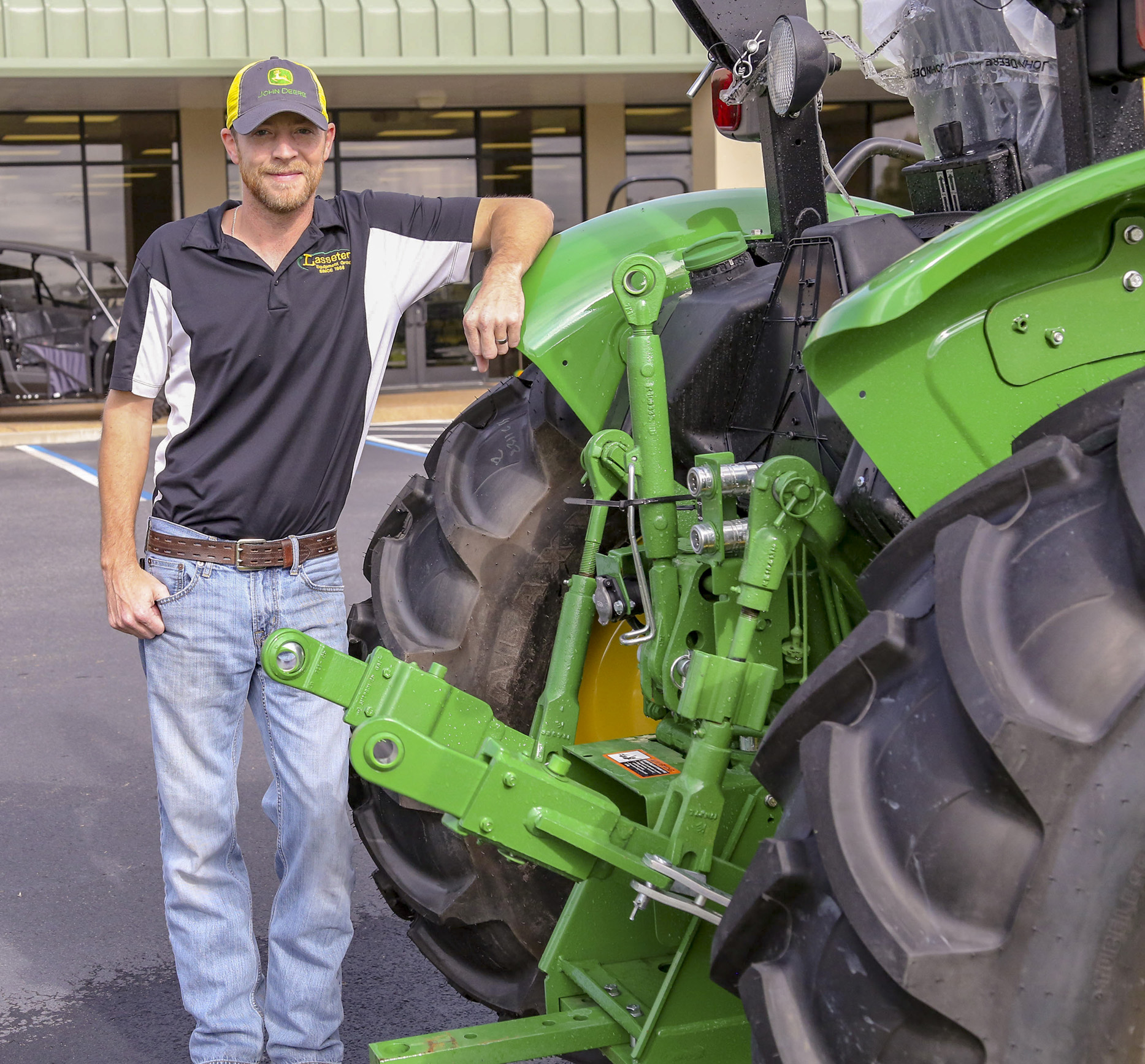 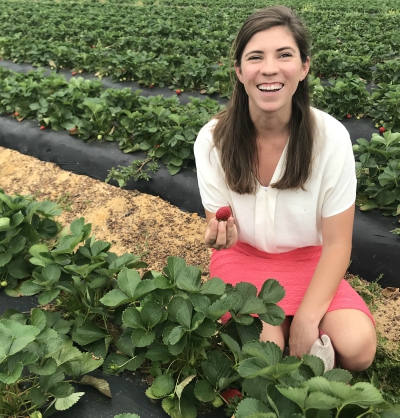 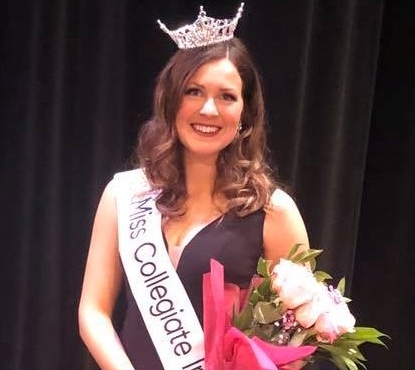 Join us in congratulating Hallie on her accomplishment! 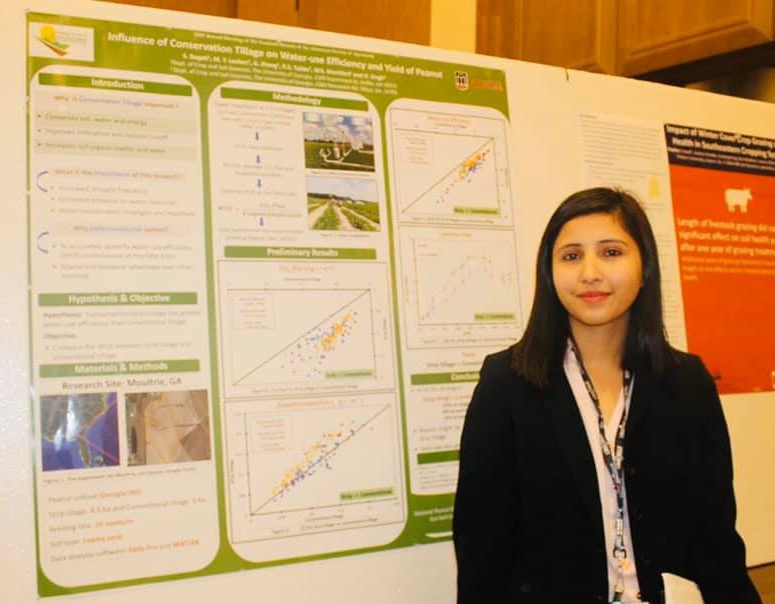 Congratulations to Sujata Bogati for receiving first place in the poster competition at the ASA Southern Branch Meeting, held February 1-3 in Louisville, KY.

The title of her poster is "Influence of Conservation Tillage on Water-use Efficiency and Yield of Peanut."

Sujata is a Graduate Assistant/Master's Student at the UGA Griffin Campus. Her major advisor is Dr. Monique Leclerc, with co-advisor Dr. R.S. Tubbs.

Logan Moore, the first graduate of the dual master’s degree program in sustainable agriculture from the UGA College of Agricultural and Environmental Sciences and UNIPD in Italy, is currently pursuing a Ph.D. in the Department of Plant Pathology. 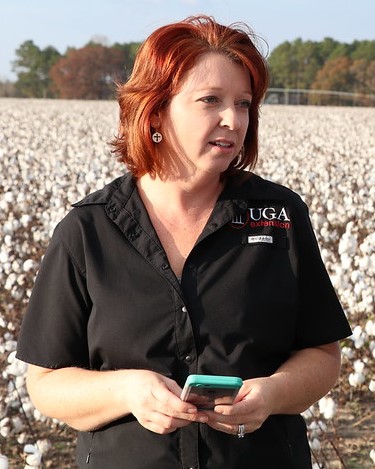 Jennifer Miller, currently a UGA Extension Agent in Jeff Davis County, is a 2005 Crop and Soil Sciences graduate who majored in Agriscience and Environmental Systems. 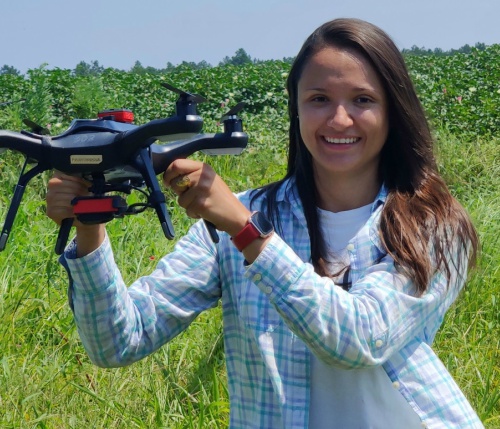 Congratulations to Matthew Tucker for his second place finish in the 2020 CAES Virtual Research Symposium!

Tucker, who receives a $500 prize for his accomplishment, is mentored by Dr. Dory Franklin. His winning presentation was titled "Relating Sensor and Soils Data to Find Relationships with Normalized Difference Vegetation Index."

Twenty-eight M.S. and Ph.D. graduate students from across the peanut research world participated in the online contest. Congratulations to both on this honor!

Natalia Espinoza from Ecuador is a Fulbright student who was awarded a GAIN Fellowship from the Graduate School to start an M.S. program in the Crop and Soil Sciences department in Fall, 2020.

Maria Teresa Tancredi (one of our dual MS students from Padova) is finishing her M.S. here and was awarded a GREAT Fellowship from the Graduate School to start her Ph.D. in Crop and Soil Sciences in Fall, 2020. 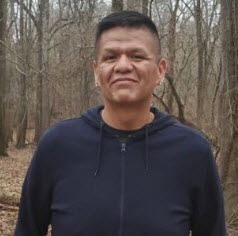 M.S. student Derrick Platero is a recipient of a 2020 John Spencer Research Grant. These grants support graduate students affiliated with the UGA's River Basin Center with small grants of up to $2,000. 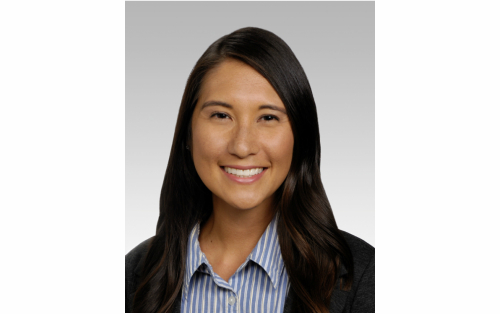 AES major Andrea Newbern believes that the skills and knowledge she gained from the UGA Tifton Campus prepared her for a successful and diverse career path that is still developing and progressing with the ever-changing GIS industry.

She believes that the program gives you not only a specialized agricultural context, but the foundational skills that can be successfully transferred to any business. 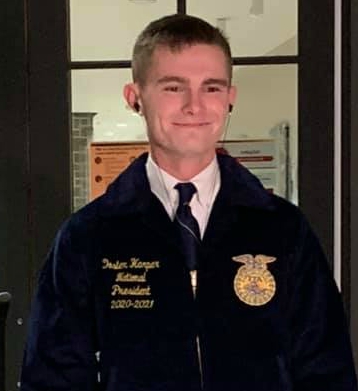 Doster Harper, a student in the Agriscience and Environmental Systems major, was named the 2020-2021 National FFA President.

Each year during the National FFA Convention & Expo, six students are elected by delegates to represent the organization as national officers. Delegates elect a president, secretary, and vice presidents representing the central, southern, eastern, and western regions of the country.

This year, due to the Covid-19 pandemic, the event was held virtually.National officers commit to a year of service to the National FFA Organization. Throughout their year of service, the officers will interact with business and industry leaders; thousands of FFA members and teachers; corporate sponsors; government and education officials; state FFA leaders; the general public; and more. The team will lead personal growth and leadership training conferences for FFA members throughout the country and help set policies that will guide the future of FFA and the next generation of leaders.

Read More About the Election 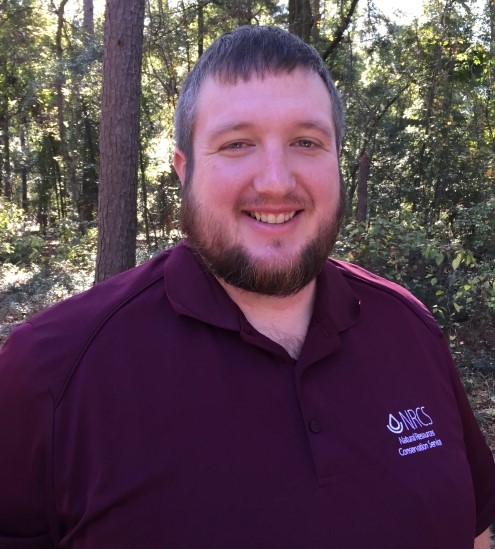 A 2011 graduate of Crop and Soil Sciences, Nick currently works as the agronomist for the USDA-NRCS Jimmy Carter Plant Materials Center in Sumter County, Georgia.